Energy from sun is free and the sun will continue to shine for billions of years to come. While the solar energy is inexhaustible and renewable, its irradiance is environment-friendly. The solar power system does not emit CO2, which is environmentally damaging. In addition, silicon, the raw material in making solar cells, is the second most abundant element in the earth’s crust. Since the solar industry has been developing and the technology is maturing, the PV power systems are efficient for both commercial and residential use. The price of PV systems is also more affordable now due to recent price cuts.

In contrast, fossil fuels, as our main sources of energy, are depleting. Our high dependence on fossil fuels is inevitably going to push up their prices continuously until they are used up. Fossil fuels are nonrenewable and environmentally damaging. Recent climate change is in part a consequence from the increased CO2 concentration in the atmosphere caused by burning fossil fuels.

Therefore, it is essential for us to seek alternative renewable energy resources for guaranteed energy supply and environmental protection. Solar is the answer.

Photovoltaic (PV) effect is the conversion of sunlight energy into electricity.

In a PV system, the PV cells exercise this effect. Semi-conducting materials in the PV cell are doped to form P-N structure as an internal electric field. The p-type (positive) silicon has the tendency to give up electrons and acquire holes while the n-type (negative) silicon accepts electrons. When sunlight hit the cell, the photons in light excite some of the electrons in the semiconductors to become electron-hole (negative-positive) pairs. Since there is an internal electric field, these pairs are induced to separate. As a consequence, the electrons move to the negative electrode while the holes move to the positive electrode. A conducting wire connects the negative electrode, the load, and the positive electrode in series to form a circuit. As a result, an electric current is generated to supply the external load. This is how PV effect works in a solar cell. 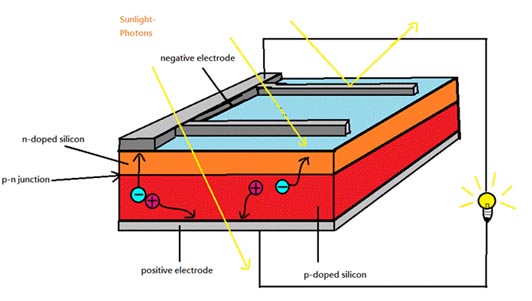 What are the parts of the solar system?

Depending on the system’s connection to the electricity grid, different components are integrated in a PV system. Generally, all the systems include PV modules, wiring, and the associating construction materials.

Solar cells are assembled together to form solar modules. Through PV effect, the solar cells capture sunlight and turn it into direct current (DC) electricity. For off-grid system, the DC can be immediately used for DC loads if there is no inverter or the DC can then be directed to an inverter, which converts DC into alternating current (AC) that is suitable for conventional electric appliances. For the off-grid system, excess energy generated from the PV panels is usually stored in batteries, controlled by the charge controller, for use at night when there is no sunlight. An optional backup power such as diesel generator can be installed if electricity from the batteries run out. For grid-tied system, DC is converted into AC to be used on-site or stored for backup if the system includes battery banks. When there is more demand, power can be drawn from the grid. Excess supply of electricity from the PV panels can also be fed back into the grid. This process of drawing and feeding electricity to the grid is monitored by the solar production meter and the export/import meter.

Solar modules can be arranged into arrays that are large enough to function as power stations converting sunlight into electrical energy for industrial, commercial, and residential use. Solar modules in smaller configuration can be installed on buildings for residential or commercial use. Solar panels can also be used in remote areas where there is a short supply of electricity or where electricity cannot be delivered such as in space.

What are the technologies and their respective manufacturing process?

Depending on the technologies used to produce the PV cell, different manufacturing process is taken place. As mentioned earlier, semi-conducting materials are the fundamental elements in making up a solar cell. By different choice of semiconductors, crystalline silicon in a wafer form, thin films of other materials, and concentrated PV (CPV) are the technologies used.

Sand is mostly made up of silica. At the first step, silica goes through carbothermic reduction process and become metallurgical grade silicon (MG-Si).The MG-Si then goes through refining and casting scratch process to become poly-silicon.

For mono-crystalline silicon, the poly-silicon is used for ingot growing either through the Czochralski(CZ) or the Float Zone (FZ) process.

For the multi-crystalline silicon, the poly-silicon material is melted and then cast into bricks.

For both mono and multi-crystalline Silicon, a semiconductor junction is formed by diffusing n-type or p-type onto the top surface of the silicon wafer to form the p-n junction in a solar cell. Depending on the process, it might start out with an n-type waver, followed by a p-type layer.

Solar cells are wired together to form a circuit.

Contacts are applied to the front and rear of the cell to protect the cells and increase efficiency in absorbing light.

With the necessary functions to generate electricity, the solar cells are assembled to form solar modules. The modules are the final solar products that can be arrange in arrays for larger output.

In addition, there is a new technology producing quasi mono semiconductors. They have similar appearance and electrical properties to the mono-crystalline silicon. The quasi-mono is produced based on poly-crystalline ingots but mono-crystal seed is used partially in the crystal growth process.

2. Thin film: thin film is an alternative technology that uses less or no silicon in the manufacturing process. The thin film PV cells are constructed by depositing extremely thin layers of the semi-conducting materials onto a low-cost backing such as glass, stainless steel or plastic. A conducting layer is then formed on the front electrical contact of the cell, and a metal layer is formed on the rear contact

Amorphous silicon (a-Si): most common and developed. It is the non-crystalline form of silicon. The cell structure has a single sequence of p-i-n layers. When exposed to sun, their power output is significantly decreased. A-Si type thin film solar cells are commonly found in calculators. A-Si type thin film is manufactured in 6 steps. First the glass substrate is coated with a TCO (transparent conductive oxide) layer as front contact, followed by P1 laser scribing. Then a layer of a-Si is deposited followed by P2 laser scribing. Then a metal conductive layer is placed as back contact with the relative P3 laser scribing

CIGS/ CIS: it is the semiconductor material composed of copper, indium, selenium, and/or gallium. In thin film technology, CIGS has the highest PV conversion efficiency. CIGS/CIS has similar manufacturing process as a-Si thin films. However, as opposed to a-Si thin film, the glass substrate on CIGS/CIS is at the rear instead of the front. In addition, Cds is applied as a buffer layer 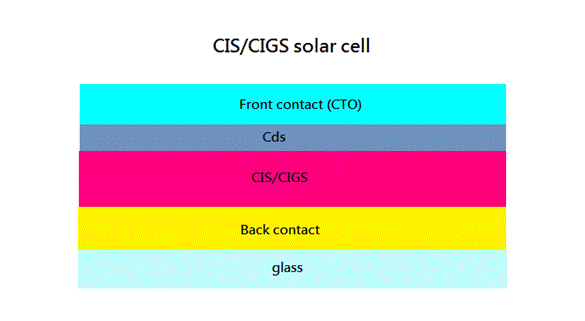 CdTe: it is formed from cadmium and tellurium. It is usually combined together with cadmium sulfide to form a p-n junction PV cell. the composition is similar to a-Si solar cell with an additional Cds layer for buffer. First Solar is the largest manufacturer.

The technology is to build the solar cells into concentrating collectors that use a lens to focus the sunlight onto the cells. As a result, less semi-conducting materials are used for solar cells decreasing material costs while collecting as much sunlight as possible. Efficiencies are in the range of 20 to 30%.

There are generally two types of PV systems: off-grid and grid-tied depending on their connection to the utility grid.

Off-Grid DC system (without inverter): The DC output is immediately directed to DC loads. Excess power is stored in the battery banks controlled by the charge controller. Common applications of this system are found in RVs, boats, cabins, farm appliances, or rural telecommunication services. A backup generator may be included.

Off-grid AC system (with inverter): An inverter is added to this system. The generated energy is directed to the inverter that converts DC to AC electricity for conventional electric appliances. Excess energy is stored in batteries and an optional backup generator can be added. 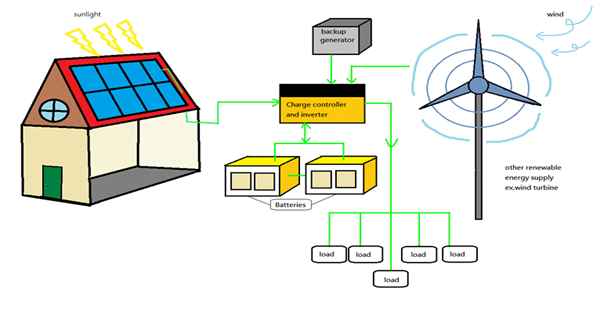 Grid-tied system (without battery backup). In this system, the generated DC is converted to AC and used on-site. The solar power production is monitored by the solar production meter. If there is an excess energy, the energy can be fed into the electricity grid. If the PV system does not generate enough power because of higher demand, needed energy can be drawn from the grid. This process of drawing or feeding electricity to the grid is monitored by the export/import meter.

Grid-tied with battery backup system. In this system, the converted AC is used on-site or stored in batteries. The charge controller monitors the battery capacity and excess energy is stored in the batteries for backup. If the batteries reach their full capacity, the excess energy can be fed into the electricity grid. On the other hand, if the PV system does not generate enough power, needed energy can be drawn from the grid. This process is done automatically through a net metering program.